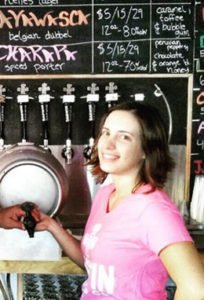 Tell us a little bit about your background.

Well, I was born in Tacoma, WA into the Air Force Base there.  Around 18 months old, our family moved to Florida when my dad finished his service.  Now he works as a Firefighter in Treasure Island.  Most of my family are firefighters, actually.

Do you have any formal training or brewing experience?

I came to Darwin’s from Rapp Brewing in Seminole, FL, a small brewery that has been voted best small-batch brewery.  Before that I had home-brewed for about six years and learned to experiment with unique flavor combinations and grain profiles.

How did you get into brewing?

My friends started brewing and I was intrigued, but I was really inspired by anything artistic or culinary-related.  At the firehouse, my dad would always cook for the guys – and at home, he ruled the kitchen too.  So brewing gave me an opportunity to express myself with cuisine.

What is your favorite aspect of beer culture?

It gives me a lot of satisfaction to see people really enjoy craft beer. It’s fun and, social without necessarily feeling like you’re trying to get “wasted.”  Enjoying a craft beer is more of a conversation starter.

Please describe the weirdest thing you have ever put in beer (while brewing)?

Do you have a favorite beer and food pairing?

What’s your favorite thing to cook? Have you ever added beer to a food recipe?

My favorite thing to cook is actually blueberry pancakes – part of the inspiration behind Pappy’s Blueberry Pancakes, which was on tap a few weeks ago.  The only time my dad would let anyone else take control was at breakfast!  My secret ingredient is cinnamon in the batter, then I’ll make a blueberry compote instead of syrup.  And I love to bake with beer – especially cupcakes with a good milk stout.

Some brewery taprooms have activities like board games, etc.  Do you have a favorite taproom activity besides drinking great beer?

I love it when taprooms do a video game day – especially old school ones.

If you could sit down with anyone (living or dead) and have a beer, who would it be and why?

Ben Franklin would be my choice.  Many people might not realize that he was a huge beer advocate and even had his own brewery.

Are there any stigmas associated with female brewers?  Who is your brew BFF?

The number of female brewers is growing, so there’s actually a lot of encouragement when it comes to that.  I’ve only encountered positive feedback – and a lot of that comes from the community.  I keep in close contact with Leslie Shore, who had my position before me.  She and I bounce ideas off each other all the time.

It shouldn’t even matter whether you’re a female or male in the brewing industry.  I hope one day it’s not even a question or a second thought.  I still feel sometimes like I have to earn respect and prove my worth as a person (regardless of my gender). It’s understood in the brewing industry that everyone needs to pull their own weight equally.

Do you get to name the brews or is it done by committee or dictatorship?

I get to name the small batches that I’m responsible for creating, which is fun. Pappy’s Blueberry Pancakes is named after my grandfather, who was a huge inspiration to me and loved beer, too!  I owe so much of who I am to him, so it was really fulfilling to name that after him.

Can you give a hint if anything might be coming from your brewery (new brew, special brew, etc.)?

We’re busy gearing up for Spring Training – we’ll have more unique small-batch beers hitting the taps in the next few weeks.