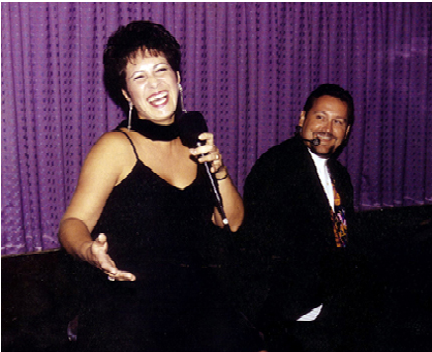 Georgia was born in Buffalo, New York and named after her father’s mother, Vaudeville star, Georgia Diamond. Georgia has performed professionally since she was ten years old. In addition to her incredible voice, she also plays string bass, electric bass guitar, flute, piano, cello and has a degree in Classical Guitar Performance.

Mike was born in Dayton, Ohio. He studied music all through school and plays Guitar, Bass Guitar and Piano. While in Dayton Mike started his on recording studio, record label, and concert production company. He has owned and managed his own booking agency in Dayton and worked as a booking agent in Nashville. He has played with Georgia in various bands since 1979, including many jingle recordings and three album projects for Motown in the 80’s. He also played bass on the road for a while with Bill Haley’s Comets.