What’s in a Craft Beer Name?

If you were a craft beer, which style would you be? Are you sweet or bitter? Are you light or stout? If you’re not sure, we may have some help for this identity crisis. With so many diverse beer names and craft beer creations, our favorite beers take on a personality of their own.

At Darwin Brewing Company, our artisan craft beers and their names are usually inspired by our Latin American roots.  Fellow brewers around the country all have varying reasons for their beer names – usually tied to their branding, a brewer’s choice, a funny story during the brew process, something catchy or clever… but it seems lately like some choose to throw darts at a board full of adjectives and nouns to hit something that might stick!

We’ve been amused by the recent rise on social media of charts to help we the people select a clever beer name… even online generators to “Find Your Craft Beer Name” and they are hilariously spot-on.

Because of the popularity of this, we thought we would share what the internet has to say about finding their beer names. According to twitter user @MelindaButtle this is the best method.

Now that your interest is piqued, find out what your craft beer name is with this fun chart by using your birthday month, first initial and last digit of your phone number. If this isn’t your style try the Craft Beer Name Generator for instant gratification. 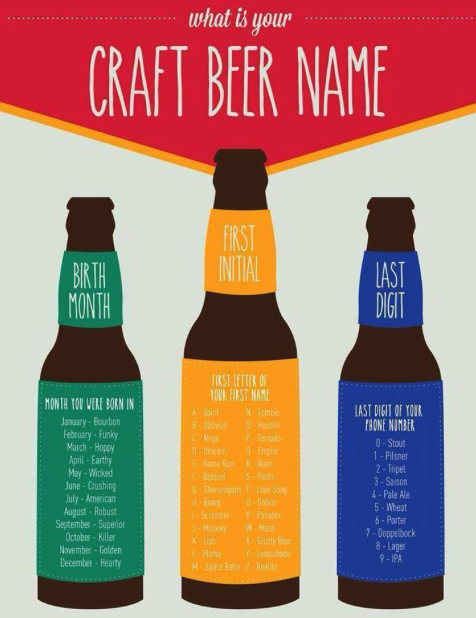 For brew superfans – check out this 10 question quiz on craft beer knowledge. The average score is 5/10: how do you think you will do in comparison?  We’re thinking to send this quiz to our friends at Steve-O Trivia who run our Finch Trivia League on Thursday nights at the DBC Taproom… some tough questions in there!

Remember, at the end of the day, it doesn’t matter what beer you are or what your name is, as long as you enjoy drinking great brew. Cheers to that!