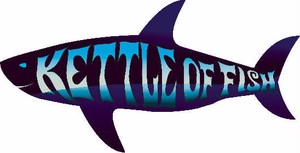 They have been performing in clubs, pubs and venues all over the United States and the World for years. They have played on stage stage with members of the Nitty Gritty Dirt Band, Roger Waters’ Band, Chris Anderson of the Outlaws Graham Forbes of the Incredible String Band, Pat Travers, Damon Fowler, Dickey Betts, the Amazing Bolts, Shea Seger, Twinkle, Devon Allman, and have opened for artists like Eddie Money, Molly Hatchet, Elvin Bishop, Tommy Castro, Trombone Shorty, the Marshall Tucker Band, among others.

Their music is more of a rootsy “blues rock with soul,” working to cross together soulful blues with the energy of rock n roll. If you like the sound of the Rolling Stones, Tom Petty, Otis Redding, Robert Cray, the Neville Brothers, Buddy Guy, Stevie Wonder, the Allman Brothers, the Grateful Dead, …you will love Kettle of Fish.