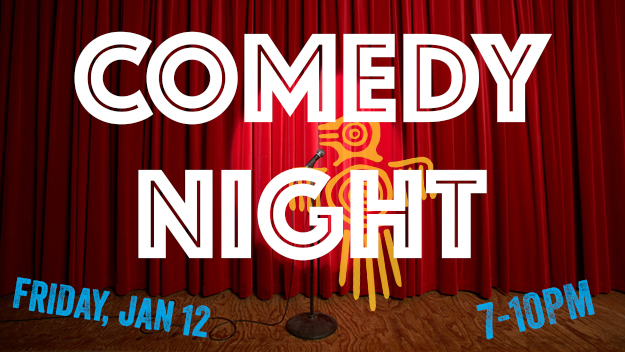 The Brewery Comedy Tour at Darwin

Herron Entertainment has been producing the best shows at clubs and theaters across the country and is now bringing those same great shows to the breweries across America. Featuring comedians in an environment they truly can feel at home in.

Herron Entertainment continues to lead the way in comedy with its cross country brewery tour. Featuring some of the best NYC and LA based comedians without NYC/LA prices because we know your money is important to you and only want you to enjoy a nice night out – without having to take out a loan.

Comedy Clubs all over the country have been producing the same style of comedy since the 1980s and have yet to step outside of the bubble and mix up their stale lineups – so we will do it instead. We will bring the future of entertainment to you.

When our stand up comedy, cross country brewery tour kicks off, we will be featuring the best and brightest NYC/LA based comedians and every city in between. As of February, Herron has 98 breweries lined up and has set a goal of visiting 300 breweries this year alone. We have spent 8 months planning and scouting the perfect locations for these shows and NONE of them will disappoint you. Some have gourmet food (not soggy chicken tendies) and ICE COLD beer made FRESH on location so there’s no skunk funk or watery drinks for $15 each (see above re: taking out a loan)

These comics will be touring your state(s) and cities performing in breweries and bars sampling the local fare, local brew and making you laugh. Get tickets fast – these shows are all selling out.

ON TAP (pun intended) for Herron Entertainment, LLC is “The BREWERY COMEDY TOUR” and it’s picking up much steam as it heads into 2018 promising to hit 300 breweries all across the U.S.A.

JAMES MYERS
Originally from Ohio, JAMES MYERS began his comedy career in 2012 at the flagship Funny Bone Comedy Club in Columbus where he was a three-time finalist in the club’s Funniest Comic contest. Bookers noticed and MYERS began MC work at Funny Bones all over the midwest . Since moving to New York City a little over two years ago, MYERS has already earned a reputation for himself in the highly competitive East Coast comedy scene. MYERS quickly became a regular at New York Comedy Club , Dangerfield’s Comedy Club , EastVille Comedy Club, the hot spot in the village, The Lantern as well as the nationwide chain of Funny Bone/Improv Comedy Clubs , and won the 2015 Hoboken Comedy Festival, beating out 45 contestants and over 300 applicants. You can also see JAMES MYERS on the Huffington Post, where he’s joined their panel for the live stream of the debate for their election coverage: If you haven’t seen JAMES MYERS at your local comedy club, you’ve most certainly seen one of his jokes online. As one of the most upvoted comedians on Reddit, his StandUpShots have garnered over 30 million views on the website alone and millions more as they have been shared by respected comedy websites like College Humor , The Chive , and eBaum’s World as well as popular Facebook pages like The Tasteless Gentleman, George Takai, and Cheezburger.Additionally, MYERS was named ComedyFilter’s Comic of the Month for December 2015 and most recently was selected to compete in the 2016 Devil Cup Comedy Festival. Myers is now touring the country focusing on the East Coast and Midwest during the Fall with trips out West in the early Spring of 2018.

CHRIS GRIGGS
has been a regular host for TV Land’s “PRIME” Movies and made TV appearances on the Discovery Channel, Saturday Night Live , BRAVO, IFC, E Television, HULU, The Discovery Channel, and ION TV. He was also selected to represent New York on the TV show “World Cup Comedy,” produced by Kelsey Grammar. Chris was also just recently featured on the hit shot “BLACKLIST” on NBC. He has also been featured in independent films such as “The Best Man” and most recently “Do Not Call.” Theater highlights include the award winning NYC Fringe Festival production of “SUV The Musical,” playing Richard Foreman in “Being Richard Foreman,” and “Goebbels! Live From Hell!” which won best play at The NYC Cringe Festival. Chris is also a standup comedian and a part of “The Average White Guy” comedy tour. He performs regularly on The PIT’s house team The Baldwins.www.chrisgriggscomedy.com

ANTONIO AGUILAR
If you’re looking for a half-Peruvian comedian from Wisconsin, look no further. Antonio Aguilar has been dazzling audiences from sea to shining sea. Antonio’s witty observational humor and smart joke-writing have been lauded by audiences, bookers and comedians alike. Antonio has been featured in comedy festivals such as the Out of Bounds Comedy Festival in Austin, Texas and the Cleveland Comedy Festival in, well, Cleveland. He is in the process of coming out with his debut album entitled “Cute, but how much does he weigh?” Look for it on iTunes, or in his backpack, but make sure you leave money in there. He has opened up for the likes of the Skylar Brothers and the cast of Super Troopers.

MIKE EARLEY
Born at a very young age, Mike has made some noteworthy progress since those early days. Growing up in Minnesota, he was born in St. Paul, eventually moving to the suburb of Woodbury in the third grade. Mike was a quiet kid in school depending on who you ask, but if you ask me, he was quiet. Given his introverted characteristics, when it came time to speak in front of the class, his natural gift to make people laugh came out. Although these engagements were few and far between, they were the initial experiences that prompted him into standup comedy.At 26, he has been writing and performing comedy for over six years. With performance experiences panning a spectrum of clubs, colleges, bars, organizations, and even a house party or two. He has entertained audiences of all backgrounds, finding little need to shock or disgust crowds for effect. Mike Earley has become a prominent talent in the Twin Cities, most recently becoming an emcee of the legendary Acme Comedy Club in Minneapolis and winning The Joke Joint’s Funniest Person in Minnesota Contest. Along with this, he is a graduate of Inver Hills Community College and the University of Minnesota.

is an actor, stand-up comedian and a viral content creator. He plays a Guest Star on this season of Chicago Med on NBC and Younger on TV Land. Tyler has received over seven million views on his viral comedy videos which consistently receive worldwide press. He has performed stand-up on America’s Got Talent and can be seen year-round performing the top comedy clubs around the country.https://www.facebook.com/TyTheFisch/videos/1937303803158838/?hc_location=ufiTYLERFISCHER.COM

is familiar with people assuming that he’s another dumb Long Island meathead. He enjoys using his comedy to turn that assumption upside down with his sharp observations about everything from dating, to psychedelic drugs, and social issues. Justin’s likability and curveball punchlines have made him a familiar face at Greenwich Village Comedy Club, EastVille Comedy Club, Dangerfield’s in NYC, and Governor’s Comedy Clubs on Long Island, among others. Justin is gaining many fans throughout the DMV area and is touring Virginia in November and December this year. He also co-hosts a movie review podcast called ‘We Don’t Watch Garbage and Neither Should You’, a podcast about the world’s greatest films and was featured on Public Access TV.

starting doing stand up as a kid after a math teacher recommended him to a local comedy club manager, but not before sending him to detention first. A decade later, Cody Woods has been headlining clubs, colleges and international USO tours while spoiling audiences with a hilariously smart and brave brand of comedy. His unique perspective stems from being raised by a single mother in a trailer while attending several schools consisting of mostly black students. As a likable comic’s comic, Cody is a hit with every type of crowd as evidenced by touring the road with a wide variety of comedians such as Todd Glass, Luenell, Dave Attell, the Wayans, Eddie Griffin, Bruce Bruce, Tommy Davidson, Greg Proops and many more. Recently Cody Woods was a finalist in the Shaq All Star national comedy competition, a finalist in Cabo Comedy Festival, was featured in a pilot with comedian Todd Glass and a movie with comedian Tony Roberts.

TICKETS WILL BE $20 AT THE DOOR